Experience cinematic kung-fu battles in the fastest, most intense brawler the indie world has ever seen! With the unique 1:1 response system of One Finger Death Punch, players will feel the immediate feedback of every bone-crunching hit.

Pay tribute to the masters using five classic kung-fu styles mixed with additional weapons. Combine face-to-face combat with throwing weapons to recreate complex fight choreographies or just send bad guys flying through glass windows. Explore a world map with over 250 stages, 13 modes, and 3 difficulty levels. Unlock 21 different skills that can be combined in thousands of ways to assist you in your journey. Put your kung-fu to the ultimate test in the survival mode.

One Finger Death Punch by Silver Dollar Games is perhaps one of the greatest examples of making the absolute most out of an incredibly simple concept. It is a stick figure fighting game where the only controls required are the left and right mouse buttons – even character movement has been omitted.

Upon starting the game for the first time, the player will go through a basic and pretty slow tutorial, explaining when to click, how to make use of weapon drops and how to fight different enemies. You’re told from the very start that button mashing will get you killed. Thankfully, the tutorial is short and covers just enough to let the player dive in.

Right from the first round, the game’s charming art style appeals. The character design is minimalist, to say the least. The player character is a simple white stick figure and the enemies are also stick figures of varying colours. The scenery is more complex, and adds to the thematic vision that the developers were going for. This is Bruce Lee – the Stick Figure Movie. In a video game.

Where the game really shines is in the animation quality and the visceral feeling that the combat carries. Each blow you land has a real weight behind it, aided by the classic 1970s-style sound effects. Each punch is an absolute joy to deliver, each kick that sends your enemy flying toward you and smashing against the screen is a reward in itself - and there are not many better feelings to be had from a game than being able to efficiently and expertly destroy a horde of fast moving enemies without missing or taking a hit.

The enemies start off at a base speed of 100 percent, speeding up as the player improves and slowing down as mistakes are made. This is where the difficulty within the game, coupled with the ever increasing amount of enemies per round, really lies. You can complete certain levels to earn power ups that will make things a little easier – giving you more arrows to shoot when picking up a bow, or allowing you to clear the screen of enemies when you reach a certain hit combo.

This is a game that relies exclusively on your left and right mouse buttons yet has an incredibly high skill ceiling. The accuracy and speed required to complete the more advanced levels is seriously intense. The depth to the levels is something that might not be immediately apparent – but struggling to complete a level at 200 percent speed will make you realise that finding the most efficient order in which to despatch the enemies introduces a whole new world of complexity.

Silver Dollar have been very clever in the way that they’ve mixed up the different types of rounds and the enemies you face. There are rounds where you have to deflect a certain number of thrown weapons, multi-rounds that include a bit of everything, boss fights that pit you against a single, strong enemy and even an homage to Star Wars in the form of a “light sword” round, where you slaughter the baddies with a light sabre – complete with appropriate sound effects.

One Finger Death Punch is incredibly addictive, and Silver Dollar have budgeted for this, incorporating competitive leader boards into the game design. Completion of a level gives you a ranking – and it is sorely tempting to go back and try and get platinum in a round if you miss out.

It’s hard to be critical of the game, especially considering the number of hours of enjoyment it’s given me for such a low price. If anything I can only suggest additions for One Finger Death Punch Two (or Two Finger Death Punch?); a cooperative or multiplayer combat mode would give you a fantastic competitive game and present something that would be immensely enjoyable with friends, which is probably the only thing this game lacks.

The Google Play version has a few more issues, however, which mostly revolve around the F2P stamina system and the cost of certain in-app purchases. Unlimited stamina costs twice as much as the Steam version on its own and there’s no way to regain lost stamina through playing.

Given that the game has such a simple premise, one would be forgiven for assuming that it was a run of the mill entry with limited playability. Never would an assumption be so utterly wrong. One Finger Death Punch was easily one of my favourite games of 2014 and I’ve enjoyed all 80 hours that I’ve spent kung-fu clicking away. It’s currently the second best user-reviewed game on Steam - higher than Portal, higher than Skyrim and higher than Counter-Strike - and it absolutely deserves to be there.

Disclaimer: This review is based on the Steam version and I bought it myself.

We discuss some features that should be added into the sequel, check the article out here 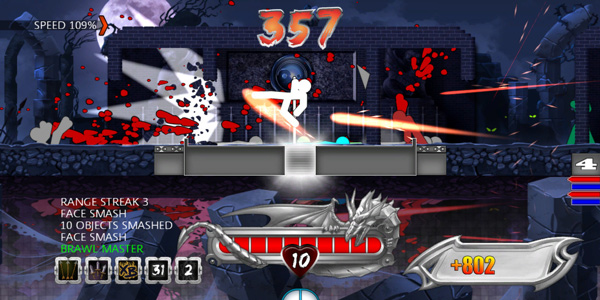 One Finger Death Punch is developed by Silver Dollar Games.