ZombieSmash! is a "Survival Comedy" game, featuring undead-themed castle defense and entertaining, physics-based gameplay. The game casts players as Joey, a lone survivor pit against a herd of writhing, unrelenting zombies - to defeat the undead masses, players must use their fingers to flick and smash them until they're un-undead.

Game Description: Zombie smash is a a zombie game by Zynga where your aim is whack, slice, dice, smash and crush all the zombies before they break into your tower. You play as Joey a lone survivor who is defending his tower from a horde of oncoming zombies.

You must flick and smash the zombies into oblivion, but finger flicking is not the only thing Zynga has in store for you in this relentless zombie whacking game. You get to acquire over 30 different weapons and upgrades to assist you in delivering some serious zombie justice. These include:

You can also mix and match the special weapons to create total zombie carnage. One example is to freeze the zombies with liquid nitrogen and then to smash them with a rolling boulder. Another is to use the falling rocks to quickly pile up the oncoming zombies and then to use the grenade to explode them all.

Combining two weapons make’s the game more than a one dimensional whacking title and increases your lust and satisfaction of eradicating zombies from your grounds. There are many more little variations throughout the game which make it a worthy title to download for some harmless limb mashing fun!

You start the game with two campaigns available to choose from:

You can select from two difficulties to start either campaign off, easy and normal, hard must be unlocked. We prefer the Lost Hills to the Camp Nowhere campaign, the setting is far more fun and illustrious.

When starting your first campaign you will notice how easy it is to get into the game and you will become attuned to the controls right away. Flicking, dragging and dropping zombies everywhere is very easy to do which you may feel can ruin the game’s difficulty. But unlike Plants vs Zombies where you always felt there just wasn’t enough of the undead to cause you to sweat and feel under pressure Zombie Smash requires a keen eye all the time to ensure no zombies break down your walls and eat you.

Quickly swiping your finger and throwing many zombies in a matter of second across the landscape causes a great bloody spectacle of mashed up body limbs! At times you will find your finger fatigue so don’t forget to vary which one you choose to mash and smash the zombies with. 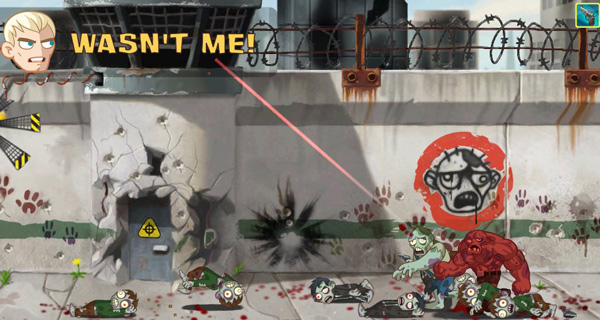 Your currency in the game comes from killing zombies. When a zombie dies a star pops up and floats for a while before disappearing – the same can be said about the weapons in the game. You must tap on the star or weapon to collect it before it disappears, which puts pressure on your fast finger skills, coordination and multi-tasking abilities.

You will notice different colour stars pop up from different foe. The harder the zombie the greater the stars reward. Weapons appear at random times, for example in the first level you will be able to collect rocks to hurl down from the sky, a pistol that is very accurate and automatically used by Joey and land mines which are deployed on the ground and blow up when an undead approaches. Next comes fireworks and spinning blades plus tonnes more fun weapons.

At the end of each round your stats are collated which include the number of stars collected, difficulty level bonus, what weapons you found, other bonuses plus number of zombies terminated.

The game does not sport an online multiplayer gameplay but you can share your points on facebook and twitter or send email to your friends. There is also online leaderboard where players from all around the world share their points and try their best to become the #1 Hockey Fighter. 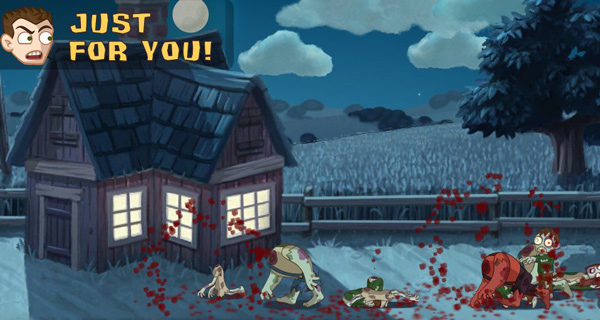 The visuals are crisp and cartoon like – just like all other Zynga games. The game also runs smooth – well at least on the phone we played it on – HTC Sensation XE. If you have a half decent phone you should be fine. We like the attention to detail with the games landscapes, the backgrounds offer enough eye candy but no too much as to distract from the game play – a nice balance is definitely found in the game.

The way the zombies break apart and fall all over the place is also very well designed; they do feel like true ragdolls when you launch them across the screen. Each zombie and for that matter weapon has its own very unique design. We love the boulder, its big, bad and clears the screen with great satisfaction, especially when you hear the crisp sound effects of it rolling over all the undead and squishing their bones into smithereens.

Expect as you progress through the game to see some great effects from the different zombie types, their abilities and the weapons you are granted to deal with them.

If you want some mind numbing fun where you just flick your finger across the screen and kill some zombies then this game is for you. After all that is what Whackit.co is here to provide you with. The game also offers a good variety of weapons to dispose of the undead with so the aggressive finger swiping is counter balanced somewhat by some different attacks such as the grenade dropping, position and pounding.

However if you have stumbled across this review looking for a zombie game with a hint of strategy mixed in with action then avoid Zombie Smash as it fails to strike such a balance. Then again to be fair to the game it doesn’t aim towards the strategy market whatsoever.

ZS doesn’t make any real new ground in tower defense or the whacking niche but it does offer enough bloody carnage to be worth the time trying and there’s enough alternative ways to whack zombies throughout to keep players entertained.

It’s a mish mash between Defend Your Castle by Xgen studios and Body Ladder by Mo Fun Zone but on a grander scale. We would recommend downloading it and giving it a try – you can always request a refund if endless smashing of zombies isn’t for you!

Zombie Smash is developed by Zynga.