More photorealistic boxing action, this time with all things Balboa!

Wait: a Real Boxing game that lets you play as the world-famous fictional boxer Rocky Balboa? Surely that’s too good to be true? It really isn’t, since Real Boxing 2: Rocky’s update allows you to actually assume control of Balboa himself. Oh yes, and this is a tie-in with the new Rocky spin-off (named Creed, after you know, Apollo) of course.

Following the staggeringly slick form of the original Real Boxing, Real Boxing 2 takes you gloved hand and leads you into yet more brutal brawls with photorealistic graphics, gameplay modes, and even story developments to keep you interested. Forming and customising your own character is central to the game’s appeal, but rest assured, there are plenty of cameos and nods to the Rocky franchise within.

So Far, So Boxing

Gameplay’s the first port of call here, and it’s safe to say that we’re dealing with a similar approach to the mechanics as is seen in the original Real Boxing. It’s two fighters in a ring, with a relatively close-up view of the participants, allowing you to feel as close to the action as is possible without dinking one of the fighters on the head with the aperture of the virtual camera. Your aim is to knock out or generally triumph against your opponent. So far, so boxing, right?

The mechanics are the shining light of this game’s appeal, and they really do a great job of portraying the nuances of a real-life boxing match. There’s the jab, hook, and uppercut punches that you can throw from the left or right sides, as well as dodges and parry moves. Punches thrown as counter-attacks carry much more weight and therefore deal much more damage than when you land regular punches. This puts the emphasis on having a well-considered defence whilst making you think tactically about your choices when it comes to attacking.   Continue Reading

The mechanics of the game are great, but the gesture-based controls really add the cherry on top of the punching-bag cake here. Swiping up for an uppercut and down for a body shot just makes you feel like you’re more involved in the action than if you were simply tapping on-screen buttons. Note that the developers have canned the Kinect-like motion sensor control options this time round, though, so it’s bad news if you were a fan of this method of input. Still, you’ve always got Wii Sports if you want this kind of control input in your boxing games.

A lack of kinetic-sensor controls doesn’t hamper the game’s other offerings however. At the outset you’re asked to create and customise a character whom you will take to the top in Story Mode or simply train and fight with endlessly in the game’s other modes. Story mode offers you the chance to play as Balboa, and encounter characters like Apollo Creed and even Ivan Drago!

The emphasis is still on customising your own boxer however, with options to swap out his skin tone, eyes, and other distinguishing features. You can even swap out his clothes and boxing gear to further personalise things. You can’t choose your gender, however, making this a male-only boxing game (with its character selection at least).

There are long-term goals for your boxer too, which mainly involve getting involved in the mini-games. These games are designed to give you a bit of action on the side and consist of things like jump-rope training. Training improves your stats to allow you to become a better fighter, and the games are generally set up as reactions-based or timing-based affairs.

There’s always going to be a setback with a game that sounds as awesome as this however. This being a free-to-play game, you just know it’s going to throw up a pay wall at some point. It does this through the game’s energy system. You need energy to fight, and you only have so many fights’ worth of energy before you have to wait for it to replenish. Or you could open up your wallet to buy premium currency, which lets you speed things up and get right back to the action. Oh dear.

Still, just look at those incredible graphics. The Unreal engine triumphs yet again here, and makes sure that its rivals, from flash games like Ivan Drago Boxing to mobile ones like Prize Fighters, simply cannot compete in terms of presentation. Real Boxing 2 looks incredible, and the only thing that can take away from this presentation is the relatively repetitive/generic-sounding music and the lacklustre sound of the punches, we explore more improvements in our Real Boxing 3 article. They just don’t quite have the impact that they should have when you consider the otherwise hyper-realistic graphics and mechanics of the game. That’s one for the sequel, eh Vivid Games? Rating: 86/100 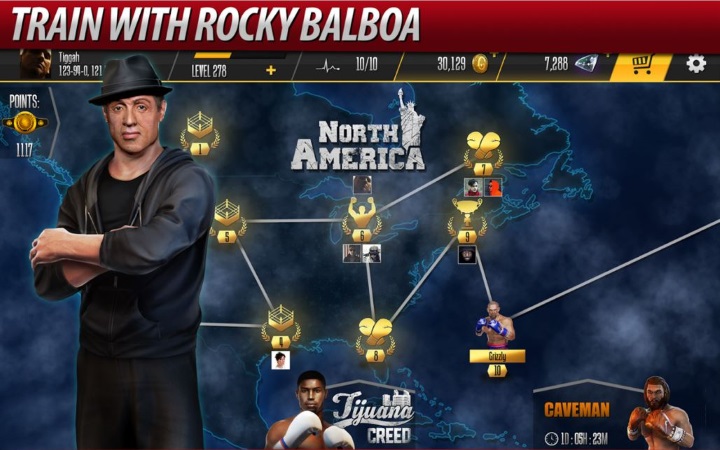