Our hero's story began in a small, peaceful village, far from civilization. there, he studied under the tutelage of a sage elder, a daoist master. every day, he gained greater skill in the ancient art of kungfu. in this way, the days, months, and years went by, happily and without event… Then one day, without warning, a gang of bandits fell upon the village. they looted, burned, pillaged and raped. determined to save the village, the elder master fought with all his energy, and all his might. at last, he drove the bandits away. but in his effort, he paid the ultimate price, sacrificing his life.

Being a master of Kung Fu not only requires you to be good in martial arts but you must also look like a real martial artist as well. We feel that there is only one man in history who truly personifies a true martial artist and that man is Bruce Lee. We were not surprised to see that the hero we got to control in the game resembles the late great Jeet Kune Do master himself. The artists behind the game’s character design and animation did a great job in not only capturing some of Bruce Lee’s moves but also some of his trademark gestures and mannerisms as well.

This is not the first time that game designers included a character resembling Bruce Lee in their games. Fighting games such as Street Fighter, Tekken and Dead Or Alive have their own Bruce Lee characters. Adding a character that looks like the late great martial arts master serves as a tribute to Bruce Lee’s legacy and accomplishments.

Looking as Sharp as a Knife

Kung Fu Warrior looks really nice for a game that uses flash animated characters. The developers who handled the game’s visuals did an outstanding job in both designing and animating each character in the game. The hero of the game stands out more thanks to his intricately detailed character model and smooth martial arts movements. While some of the bad guys in the game could use a little bit more animation, they are still nice to look at especially the bosses.

The game’s design and theme for the background stage were all inspired by classic martial arts films. We really love the wooden bridge stage that has a huge moon in the background, the mood that was created was perfect since this is the stage where you will fight one of the game’s boss characters. Our only gripe with the game’s visual is that the stages do not have any animations, they are all static pictures. It would have been great to see the weeds blowing in the wind in the grassland stage or clouds slowly covering the moon in the boss’ stage. Still, the backgrounds offered a sense of depth thanks to the 2D parallax effect the artists of the game applied to them. While we recommend playing Kung Fu Warrior on an Android device with a big screen, playing it on a device with a 10 inch screen might be too much because the stages will begin to pixelate too much. A 7 seven inch screen is just right for Kung Fu Warrior’s visuals.

Listening to the Blowing Wind

Mastering the Art of Kung Fu

The game’s gameplay resembles games like Capcom’s Final Fight and Sega’s Streets of Rage. You are given two attack buttons, a parry or counterattack button and a special attack button. Combining a the directional button – either left or right, and parry button will make the hero jump. Kung Fu Warrior’s controls are responsive and easy to master. The only problem we had with the game’s control was when we were playing the game on a 10 inch Android device. The control buttons were too far away from each other, it was hard to press them properly. We advise playing the game on a smaller Android device to avoid cramps in your hands.

Accessories that increase your character’s attack power and defense can be purchased using gold earned as a reward for finishing stages in the game or from treasures dropped by enemies. Just press the Power Up tab in the game’s menu to see the available accessories and their prices. More accessories can be unlocked by playing through the game. Some of the stages have unlockable accessories, so make sure to check which one has them and play through them to unlock the accessories. 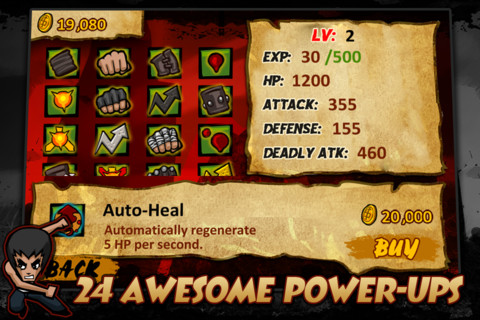 Players who do not want to play through the game multiple times just to earn enough money to buy some of the most expensive accessories in the game can purchase gold bundles online from the game’s developer – just like premium items in other online games. While we can understand the purchasing of gold to buy the expensive accessories in the game since it takes a lot of time to accumulate a huge amount gold just by playing, what we can not understand is the purchasing of all the moves and combos as a premium item. Gaining experience points in the game is not that hard and does not take a lot of time either. We guess some people just do not have the patience and skill to play Kung Fu Warrior the old fashion way.

Competitive gamers who want to challenge themselves can post their scores online. An online Leaderboard is available where players can view their scores and compare them to other players scores around the world. Kung Fu Warrior also has an achievements list for players who want to challenge themselves more by fulfilling certain things in the game under specific requirements.

Once your Destiny has been Fulfilled

Kung Fu Warrior offers not just great visuals but some really fun action-packed gameplay as well. The game is highly recommended for both new players looking for a fun game to play during their spare time and for people who love beat em up games. With tons of accessories to collect and a dozen moves to learn and master, Kung Fu Warrior will definitely keep any gamer busy for a while. This game deserves a sequel and we are truly hoping that the developers are already busy working on it. We give Kung Fu Warrior an ass kicking score of 82/100.

Read our suggestions for a sequel of Kungfu Warrior