Please note even though this page is for the mobile version of Injustice 2, the game is due to be released on all platforms on the 16th May 2017.

Enter the Universe of Injustice 2 and unleash the powerful fighting style of your favorite DC Super Heroes and Villains. Expanding on the hit game Injustice: Gods Among Us, Injustice 2 delivers brand new characters, tons of exciting new modes, and the look and fighting style that NetherRealm Studios is known for. Leverage the all-new Gear System to build and progress your roster like never before ? then enter the arena and become the ultimate DC fighter in blockbuster 3-on-3 action.

Injustice 2 is a massive leap forward in every way possible. Master new, dynamic fighting controls that allow you to jump, duck, shoot projectiles, and execute epic Super Moves that has defined Injustice combat.

Every Battle Defines You

Injustice 2 offers you more ways to build, level up, and progress your roster of iconic DC characters. Upgrade with a Combination Level and Star Rating system by collecting characters and unique gear. The Gear System provides new looks for your character, as well as bonuses to your health, abilities and strength.

Injustice 2 continues the story set in motion in Injustice: Gods Among Us. Set in the future, Batman and his allies work towards putting the pieces of society back together but struggle against those who would restore Superman's Regime. In the midst of this chaos, a new threat appears that will put Earth's very existence at risk. 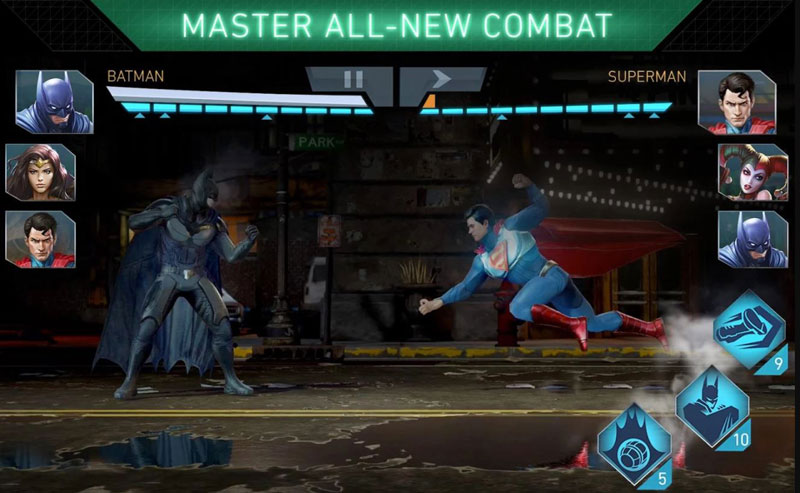 Injustice Gods Among Us 2 is developed by Warner Bros. International Enterprises.