Game Description: If you are a big fan of ice hockey then this game might disappoint you a little but if you are into hockey violence, blood and gore then Hockey Fighter Game Pro is just for you. It is a game of pure violence. Throw away your hockeys, take off your gloves and start fighting other team players for no reason and beat the living crap out of them.

While in quick play you can play a match against any of the opponent that you have unlocked through tournament mode. You can also unlock achievements by performing moves and combos. You can earn respect points by winning matches and unlocking achievements, then use these respect points to upgrade your fighter’s attributes and make him more powerful.

The game does not sport an online multiplayer gameplay but you can share your points on facebook and twitter or send email to your friends. There is also online leaderboard where players from all around the world share their points and try their best to become the #1 Hockey Fighter.

I personally think that the controls are easy to understand and well placed. The game has four buttons two on the right side and two on the left. Buttons in the top row are for high punches and the bottom two give you low blows. You can easily carry out different combos by tapping these buttons rapidly, like a button masher. Controls are responsive and easy for newbies to understand.

Visuals are crispy clear like HD. The game boasts 3D graphics that are not jaw-dropping [like ShadowGun] but still very impressive and enjoyable. You can also enable blood in the preferences and enjoy beating your opponent to death while he bleeds like hell. You can choose a different color for your player’s [or should I say Fighter’s] costume.

The Hockey Fighter game has the best background soundtrack even though there is only one track but it reminds me of all the UFC games with awesome soundtracks. There is also commentary during the match, which I think needs a more professional voice. Players also have a few sound effects like Ugh!, Ahh! when they get hit but the game needs more. 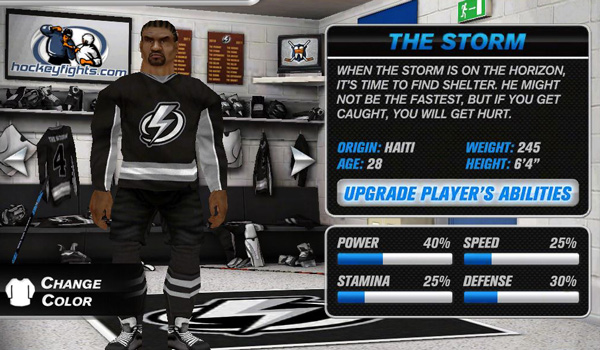